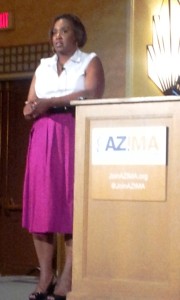 You CAN make a huge social media effort work without a huge staff. That’s one of the lessons gained from hearing an inspiring message from Beverly Jackson, Director of Marketing & Social Media for the Grammys, at the May AZIMA event held in Scottsdale.

Jackson provided an insider’s look to 100-plus AZIMA members how The 54th Grammys became “the most social event in the history of television.” Her relatively small, in-house group of social media workers, teamed up with assistance from agency Chiat Day and a social analytics firm, helped bring The 54th Grammys to a massive audience across multiple online platforms.

Jackson outlined a concept of ‘transmedia’ and hashtag usage that helped her team plot out a strategy to hit all forms of online content. Instead of letting the Twitterverse dictate which hashtags to use, Jackson and her team decided early on to manage the hashtag terms and help bring the flow of messaging to those terms.

Jackson’s team used an innovative social media approach to announce to media about which hashtags to use for all the events surrounding the 54th Grammys. One slide she shared (see below) noted a different hashtags for the 6 Twitter accounts and 14 Facebook pages her team set up for different Grammy activities and the audiences around those specific events.

Some of the highlights noted during Jackson’s presentation included: 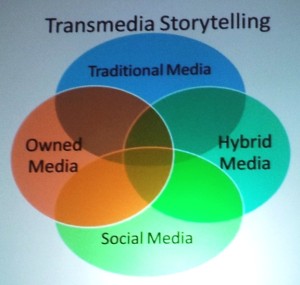 –       A record high number of 160,341 tweets per min were recorded during the live Grammys telecast 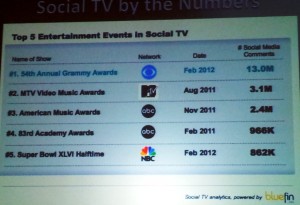 Ms. Jackson brought a wealth of experience to the presentation stage. In addition to her current role as Director of Marketing, Strategic Alliances and Social Media for The Recording Academy and the GRAMMY Awards, she has previously worked in digital and business development roles at Octagon/IPG in the Music and Entertainment group and WPP’s JWT.  Beverly also served as the VP of Product Development during the start of phase of BlackVoices, now a part of the Huffington Post.

Ms. Jackson clearly struck a chord with the AZIMA members, who raved online about her presentation, and discussed on Twitter how to translate her massive event expertise in social media to individual campaigns in the AZ and SW US region.

Guest Post By: Dave Murrow is a Valley-based digital pro working in SEO, PR/Content and Digital Marketing. Read his blog posts atDaveMurrow.com and at Mint Social.