Augmented & Virtual Reality: The Next Frontier of Interactive Marketing

Interest in “VR” soared in 2016.  But is this emerging media just a trend, or, is it going to revolutionize the way you reach consumers?

“VRtually There,” is the innovative program launched by the USA Today Network which acts as launch pad for telling the nation’s stories in the growing medium of VR. In October, USA Today announced the launch of the first weekly virtual reality news show in partnership with YouTube and premiere launch sponsor Toyota. Program segments are produced by journalists across the country and are an extension of the Network’s pioneering work in VR. 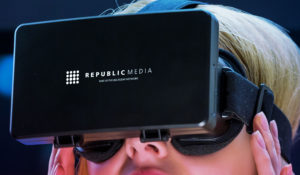 Join us on Thursday, November 17 as Kevin Gentzel, USA Today Network’s Chief Revenue Officer, discusses the incredible opportunities VR presents to advertisers. He’ll highlight the “cubemercial,” (a name referring to the first ad unit native to VR that will place viewers inside a room) and how advertising standards are being set for VR.

The first 75 attendees to arrive will receive a free pair of VR goggles!

Kevin joined Gannett as its first chief revenue officer (CRO) in 2015. Kevin previously was head of Advertising Sales, North America at Yahoo!, and earlier served as CRO of The Washington Post. Before joining The Post, Kevin was CRO of NDN, responsible for all advertising revenue, brand marketing and corporate communications for the company. Kevin also served as CRO at Forbes Media where he was responsible for all advertising revenue and marketing for Forbes.com and Forbes magazine, among other publications. Before assuming the role of CRO in February 2010, Kevin was president and group publisher of Forbes Media.