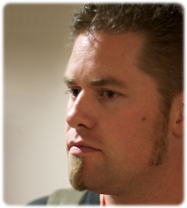 Wow, I can’t believe this is the seventh edition of my Mission to Meet AZIMA Members series.  I hope you all are enjoying it as much as I am!

This week, I am pleased to introduce you to Ethan Mowery, a “self proclaimed Internet guru.”  He is the Director of Online Advertising for Orange Slyce, as well as freelance web consultant and designer.  He said he was excited to attend AZIMA events to meet others in the industry and learn from them.

Check out Ethan’s online portfolio to see some of his work!

Also, don’t forget about the upcoming AZIMA event on September 14th to learn about how social media is being integrated into political campaigns.  See you there, and hope to catch you with my flip cam!

Social media is used as a marketing strategy by businesses across the world.  Everyone is on Twitter and Facebook these days, and if you’re not, you’re surely missing out on making connections and developing relationships with millions of people.  Personally, I use social media to connect with others in my industry, keep up popular brands, get breaking news and track the setlists of my favorite bands. And recently, I have noticed an influx of political figures using social media.

Social media is used in all sorts of promotions, so why not political campaigns?  Sites like Twitter and Facebook are used constantly throughout the day by millions of people who are open to connecting with others.  People often get breaking news via social media.  In fact, CNN has more than a million followers on Twitter.  It makes sense that political figures would be represented on social media sites, though I assume the tactics used in a political campaign may be different than a brands promotion of a new product.  With politics, there are reputations to protect, and very high profile reputations at that.

Luckily, AZIMA has given me a chance to learn about social media use in political campaigns this September.  On Tuesday, September 14, two local experts will share their experiences with social media in politics.  Republican Jeremy Vaught is the Web Strategist for John McCain’s 2010 campaign and Democrat Kevin Spidel has worked in a variety of political campaigns and international advocacy organizations.  Join me at the event and learn more about social media.  Register today!

The sixth edition of Mission to Meet AZIMA Members video series features Cory Howell of MorePro Marketing.  Howell, interested in local search sites, said he was looking forward to meeting other Phoenix professionals and looking forward to the presentation.

What do you think of the video series? Is it helpful to put names to faces in our industry? Personally, I am having a great time talking to and getting to know AZIMA members. See you September 14th!

I know you’re all dying to meet this week’s featured AZIMA member, but I’m sure most of you already know him! At the August 10th social event, I had the pleasure of interviewing Matt Siltala before he spoke about local search sites to the group.   Siltala is one of the founders of Dream Systems Media and has been involved in the Internet marketing world for many years.  He knows a ton about SEO and is a Yelp-lover too!

In addition to being an SEO fanatic, Siltala is a big Arizona Cardinals fan, so we decided to ask him about his predictions for this season as well 😉

Also, for the record, my friend and co-worker Michael Schwartz has volunteered to help me with the Mission to Meet AZIMA Members video series.  We look forward to meeting some of you next month on September 14th to discuss social media and politics.

This week’s featured AZIMA member is Jessica Dimino from Orange Slyce, the “eHarmony of student employment.” I had the pleasure of meeting a few Orange Slyce employees and found out what they are all about. Dimino said she learns a lot from AZIMA events, which is what keeps bringing her back each month.

Now the fourth week of the Mission to Meet AZIMA Members is complete! And don’t worry, I got a new batch of videos at the event last Tuesday. Also, don’t forget to check out this month’s AZIMA webinar, which is today at 11:30 AM PDT!

You’ve probably already heard the buzz: there’s another Social Media AZ event coming up in September. Woo hoo! Here are some details about what you’ll learn at the event:

Sounds like a great time right? See the buzz: Check out all the peeps already tweeting about the event (you might even find a coupon code or two!). #SMAZ

Hope to see you there!

Parking: There will be free and discounted parking available. Once you register you’ll get more details.

The third installment of the “Mission to Meet AZIMA Members” series features Amy Linert from McMurry. Linert said she likes to attend AZIMA events to share case studies and information with other experts in the industry. She also said McMurry actively recruits at AZIMA events. Check it out for yourself in this short video!

Don’t forget about AZIMA’s August event tomorrow, August 10 at 6 p.m. at the Scottsdale Hilton. The discussion led by Chuck Reynolds and Mat Siltala will be about local search and review sites. Hope to see you there! And hope to catch some of you with my Flip cam.

t to learn strategies to boost your local internet presence, meet cool Internet marketing enthusiasts, and escape the unbearable August heat? Then join AZIMA on August 10 for its Local Search & Review sites event featuring Chuck Reyolds and Matt Siltala. We can’t imagine that you’d want to be out and about enjoying the potentially illegally hot temperatures!

Learn all you wanted to know and more from two of our favorite Valley Internet marketing extraordinaires. Chuck Reynolds comes to AZIMA with professional web strategy, search engine optimization, and local SEO services experience for individuals and businesses alike. He stays busy putting together and helping with local organizations including Phoenix WordCamp, PodCampAz, Arizona Entrepreneurship Conference and Ignite Phoenix.

runs his Internet Marketing firm, Dream Systems Media where he specializes in link building strategies, link baiting, social media marketing and optimization, and reputation management. He is also an avid blogger and SEO Consultant and is ready to assist you and your SEO efforts!

Come to the August event prepared to learn more than you ever thought possible about local business listings. Don’t miss this opportunity to ensure that your company (or yourself!) is the first thing that local Googlers and searchers-alike see when searching for products and services online

Get your tickets now!

If you missed my last post, I have made a pledge to myself to meet a few different people at each AZIMA event.  In the process, I hope to someday be connected with each member and find out what drew them to joining AZIMA or attending that specific event.

This week’s featured AZIMA member is Adam Ayers from Arkayne.

See you all August 10th at the Scottsdale Hilton!  Before we discuss local search with Chuck Reynolds (@chuckreynolds) and Mat Siltala (@Mat_Siltala), look for me with my Flip camera and say hello!