The August AZIMA event featured guest speaker Neal Schaffer of WindMill Networking and author of Maximizing LinkedIn for Sales & Social Media Marketing, who spoke about the power of social media, and in particular LinkedIn, to drive results for your company and your career. Neal reinforced the importance of businesses needing to not only participate in social media, but embrace it throughout their organization. A few years ago, social media was viewed as a fad – but now its here to stay. According to Neal, more time is spent online than watching TV, especially among 45-54 year olds, so it’s critical we shift our marketing focus there accordingly.

Neal broke down social media strategy into something easy to understand and act upon. According to Neal, the average marketer or company goes through three stages of understanding social media:

Once marketers move to third stage and have fully embraced social media, Neal recommends the PDCA approach. What’s that, you ask?

In the end, you’ll realize just how critical the role of a social media marketer is. Neal believes its so important a community manager should truly be a 6 figure job!

Neal also shared some tips for LinkedIn with the audience – Neal was one of the earliest adopters of LinkedIn and known as one of the original “LinkedIn Lions.” He was part of the open networking movement and built his connections to be as large as possible, generating tons of business leads, consulting gigs and job prospects. Neal encourages marketers to be open & connect with each other on LinkedIn as a great way to generate leads and connect with others. 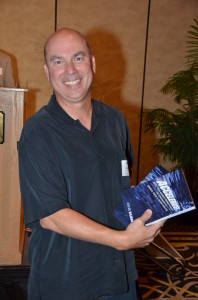 In addition to the presentation and usual networking hour, we gave away a free Kindle to one lucky attendee, as well as a few copies of Arnie Kuenn’s new book, Accelerate!, which just debuted recently on Amazon and can be purchased here.

Thanks to all that attended!